The race for the 22nd Congressional District is a pretty close one, according to an exclusive Time Warner Cable News-Siena poll.

11 percent of those polled answered “don’t know or no opinion” on this question.

Steve Greenberg joined Capital Tonight to break down the numbers in the poll. Watch Video! 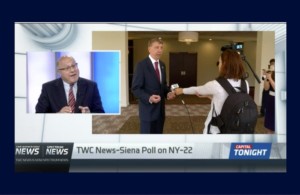 NEXT -> Martin Babinec, a political newcomer, is gaining unprecedented momentum with voters as his independent messages focused on cultivating and investing in our home grown job creators is taking off. Here’s a breakdown of the three-way race that’s making national headlines.