Little Falls, New York – Independent, Reform and Upstate Jobs Party candidate Martin Babinec is the first candidate back up on the air in the 22nd Congressional race, with a 15-second ad, “Winners and Losers.”

Airing in the wake of last week’s Start-Up NY hearings, the ad highlights Babinec’s strong resume as a successful entrepreneur, small business investor-advocate, and his concerns about the misuse of state tax dollars to incentivize jobs.

“Like our arcane election laws, the state’s economic development programs are run by politicians for the benefit of the politicians, with a set of rules so opaque, so arcane and so misleading they actually told General Electric, founded in 1892, that their corporate headquarters could be eligible as a Startup – that’s a disgrace,” said Babinec.

This ad is running on broadcast, cable and online throughout District 22.

Script:
Private investors should fund businesses, not taxpayers.
Government needs to stop picking winners and losers.
I’m Martin Babinec and I approve this message because politicians talk about jobs. I actually create them. 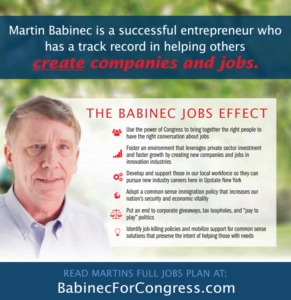 Next -> Let’s keep families together in Upstate New York. Review the Babinec JOBS Effect for his plan to create high-paying jobs across our region, and keep our best and brightest talent from moving elsewhere to pursue opportunities currently not found in UNY.