ALBANY — After a poll showed third-party candidate Martin Babinec within striking distance of his opponents in New York’s 22nd congressional district, the businessman is making the case that he can be more than a spoiler.

“The idea of trying to point my message toward one party or another doesn’t appeal to me,” he said. “The message I’ve got in being an independent candidate and being a jobs candidate, that message is being received and appreciated by a large segment of voters in the district.”

The district covers eight counties in central New York and includes Binghamton, Cortland, Utica and Rome. The district is represented by retiring Rep. Richard Hanna, a Republican who became the first GOP member of Congress to back Hillary Clinton over Donald Trump.

Babinec — who founded the online human resources company TriNet — is representing the Reform Party and Upstate Jobs Party (although it will be on a single ballot line) and has committed $1 million to his own campaign. Babinec founded the Upstate Jobs Party after failing to secure the Independence Party line in June.

“Career politicians talk about having to attract jobs here, so they take our tax dollars to open up some place that will suddenly create jobs,” he said. “That’s what our politicians have been doing for the past four decades, and look where that’s got us.”

Babinec says his approach to job creation is more holistic than cutting taxes and regulations — both of which he supports — and emphasizes constituent service and increasing collaboration between groups and organizations in the community to create jobs.

“While its true that lower taxes and fewer regulations will help, the reality is a single person in Congress will not move the needle on jobs [in the district] on that alone,” he said.

Both Tenney, who has the backing of grassroots conservatives and tea party groups, and Myers, whose father is the founder of Dick’s Sporting Goods, have also been trying to woo voters with platforms that emphasize economic growth.

One of the most successful third-party congressional bids in New York was made by Doug Hoffman, a Conservative Party candidate, who in a 2009 special election for a seat representing the North Country outdrew the Republican nominee and gained more than 40 percent of the vote but lost to Democrat Bill Owens.

He also polled between 22 and 25 percent across the district, while Tenney and Myers were less popular in the regions closest to their homes.

“I’m staying true to who I am and that message is resonating with voters,” he said.

Babinec’s candidacy is more likely to hurt Republican chances to win the seat. The district voted for Mitt Romney over President Barack Obama, 49.2 percent to 48.8 percent, in 2012, and the recent Siena poll showed that voters preferred Trump to Clinton, 46 percent to 35 percent.

Babinec said he would caucus with Republicans if elected. 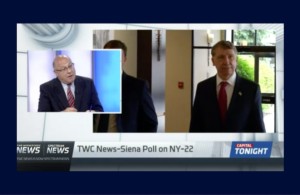 NEXT -> The race for the 22nd Congressional District is a pretty close one, according to an excluve Time Warner Cable News-Siena poll. Pollster Steven Greenberg of the Siena Research Institute says, “Rarely do we see a truly competitive three-way race, but that is certainly what is playing out in NY 22.” Watch the full video segment on Time Warner News.