UTICA, NY–New Siena College polls show close race for the 22nd Congressional district. These numbers are released ahead of the Utica Rotary’s third installment of the “Meet the Candidates” forum.

Republican Claudia Tenney had her forum on September 9th and Democrat Kim Myers spoke on the 16th. Upstate Jobs Party candidate Martin Babinec will speak Friday at the Holiday Inn on Burrstone Road at noon.

While Independent candidates tend to draw support from one side more than the other, the latest Siena poll shows Babinec pulling virtually equal shares from both sides.

The poll reveals 22% of Republicans voters say they’ll vote for Babinec, along with 24% of Democrats and 25% of Independent voters.

Of all voters polled, Tenney has 35% support in the 22nd district, Myers has 30% and Babinec trails at 24%.
Tenney leads Myers by 7 points among Broome and Tioga county voters, Myers’ home districts.
In Tenney’s home district of  Herkimer, Oneida amd Oswego counties, the race is much closer with Myers and Tenney polling within one point of each other. 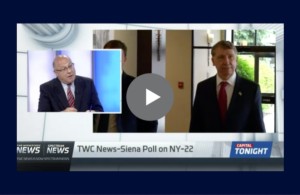 NEXT -> Expert pollster Steve Greenberg from the Siena Research Institute joined Capital Tonight to break down the recent poll numbers, that reveal Martin Babinec drawing from each party, region and gender. Watch the video!