The National Journal reports on Martin Babinec’s third-party campaign grabbing a fifth of the vote in recent polls, creating an, “Increasingly unpredictable race in a top House battleground district in central New York…with the potential to play spoiler to either his Democratic or Republican opponent.”

In an interview with National Journal, Babinec describes himself as a fiscally conservative and proponent of lower taxes and small government. He will be running on the Reform and Upstate Jobs Party ballot lines, and he said he isn’t worried about how his opponents try to brand him.

“The jobs message and what I stand for as an independent candidate is being embraced by the broad spectrum,” Babinec told the National Journal. “It’s not about trying to fit into a tight ideological box.”

Babinec continued to say his recent polling is proof he is more than a spoiler. While the National Journal reports some local Republicans predict Babinec is more likely to splinter the GOP vote because Tenney is too conservative for the moderate-learning district. 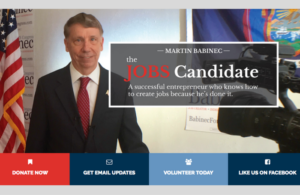 NEXT -> Stay up to date on Stories, News and Videos from the Babinec for Congress campaign. Sign up for email alerts and newsletters, or submit your own questions at BabinecForCongress.com/Contact