I Agree to See: Martin Babinec Shows What It’s Like to Run Third Party

Reform Party candidate and businessman Martin Babinec, running for an open House seat in New York’s 22nd congressional district, is on a bit of a roll.

A late September poll shows him with 24% of the vote, just 11 points behind the frontrunner. And he picked up the endorsement of the U.S. Chamber of Commerce, the first time the business association has endorsed a third party candidate.

Now Babinec is hoping to build on his momentum with an online documentary series, “Running Independent.”

The “branded documentary” company Floating Home Films approached Babinec about cooperating for the movie, but it was initially designed to be released after the election. According to a campaign statement, “ultimately the decision was made to give voters a real time look inside the campaign and invite them along for the journey.”

We see them hop in a van to the Binghamton’s annual Spiedie Fest and Balloon Rally to identify “10 solid volunteers.” On the ride, Babinec muses why he may be meeting his moment, “this particular year, there are some forces at work that make it feasible and, if anything, even exciting.”

Is Martin Babinec Giving Independents a Road Map To Victory?

The installment ends with a teaser for Episode 2: showing a Democratic tracker following Babinec as he hunts for volunteers at the festival. Babinec says, “if most voters understood these are the games being played, I gotta believe they would be upset.”

If Babinec can pull off an unexpected victory, he may be laying out a road map for how third-party candidates can both build campaign organizations and create their own media. 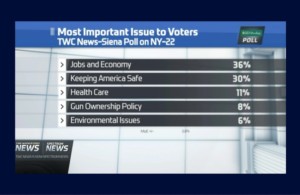 Read each issue in full here.