Where do the candidates stand in the race for the 22nd Congressional District?

That depends on which poll you view. Three different polls released in the last two weeks show different levels of support for each:

* A poll dated Sept. 2, conducted by Public Opinion Strategies, a Republican polling firm based in Alexandria, Va., on behalf of Tenney’s campaign and the National Republican Congressional Committee, showed Tenney leading the race at 33 percent, with Myers at 27 percent and Babinec at 23 percent.

* A poll dated Aug. 30, commissioned by the Democratic Congressional Campaign Committee, found that Myers and Tenney both were polling at 35 percent, with Babinec at 21 percent.

* And according to a Sept. 8 news release from Babinec’s campaign, a poll conducted by Broadnet, a technology company that helps clients understand their audiences, showed Tenney was in the lead, while Babinec was in second and Myers in third.

“Campaigns only release internal polls when they’re favorable,” said Phil Klinkner, professor of government at Hamilton College. “My guess is it indicates it’s a close race. Polling in congressional races isn’t always great, but I’m sure these are decent enough polls.”

So, which poll can you trust?

Timothy Malloy, assistant director of the Quinnipiac University Poll, a public opinion polling center, said he takes anything linked to a candidate “with a grain of salt.”

“If it’s done specifically internally by the campaign, they may structure the questions they ask to get the answer they want,” he said. “There’s an art and a science to this questioning and the way you write the question can dictate the answer you’re going to get. So I think that an internal poll by a politician might be more biased towards trying to write a question and get the answer they’re looking for where as we do everything we can to leave them wide open for an answer.”

Steven Greenberg, Siena Research Institute spokesman and pollster, echoed Malloy’s sentiments and said that voters should be skeptical of polls put out by campaigns because the campaigns are trying to show how their candidate has an advantage or why the election is moving toward their candidate.

What should voters look for when it comes to polls?

Greenberg said those done by independent, trustworthy pollsters like Siena, Marist College, Quinnipiac and Gallup Inc. are where to look. (Although even they aren’t right 100 percent of the time.)

“I think voters can look at those kinds of surveys,” Greenberg said, “and have confidence that they are done fairly appropriately using the right methodology to ensure that it is a fair poll within the margin of error and with a 95 percent confidence level.”

It doesn’t appear that any independent polling has been done for this congressional race yet. However, Siena College may do some between now and the election.

What do the candidates’ polls say?

Babinec’s poll, according to his campaign, shows that Babinec is “surging” — going from 3 percent in a June poll to around 20 percent in August. The poll also shows almost 26 percent of voters remain undecided in the race.

Tenney’s poll, according to the poll memo, demonstrates that the candidate “has the momentum in this race” and is “well-positioned as the fall campaign begins in earnest.” The memo states that if Tenney has the necessary funds to grow her image across the district and to “push-back on the negative attacks from her opponents and outside groups,” then she will be well on her way to obtaining the seat in November.

The Democratic Congressional Campaign Committee commissioned poll, meanwhile, indicates that “Tenney’s problems with self-identified Republican voters and Babinec’s presence on the ticket make this a real pick-up opportunity for Democrats.” It also states that Tenney enters the race with “mixed popularity.”

Klinker said those results suggest there’s no clear winner at this point.

“You can’t trust any one poll, but between the three of them, it probably shows that it’s a close race between Myers and Tenney, and Babinec’s probably pulling in a decent number of votes,” Klinkner said. “Who he’s taking more votes from, I have no idea.” 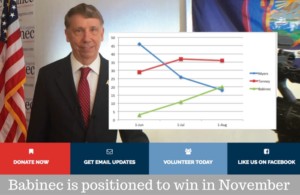 NEXT -> The Babinec for Congress campaign release its own polling confirming the race is tightening as we head into the last 60 days of the campaign. Take a dive into the numbers in The State of the Race: Unprecedented Territory for a Third Party Candidate.