The race for the 22nd Congressional District, which includes all or parts of 8 counties in central New York and the Southern Tier, is considered to be one of the most competitive in the nation. That’s partially due to the presence of a surprisingly strong third-party candidate, Martin Babinec. But high polling numbers are just one of the candidate’s assets in this campaign.

At the Taste of Cazenovia, a local food and spirit tasting event, Babinec weaves through the crowd seeking new faces and potential votes. He circulated the area largely unrecognized by most, reflecting what has become the entrepreneur’s chief hurdle in his quest to replace retiring Rep. Richard Hanna (R-Barneveld) in the 22nd Congressional District.

A September poll from Siena College and Time Warner Cable News found that Babinec is in a close third place with 24 percent of the vote. Republican Assemblywoman Claudia Tenney leads the contest with 35 percent and Democrat Broome County Legislator Kim Myers comes in second at 30 percent. But nearly half of those polled did not even know enough about Babinec to register an opinion. It’s why he has injected $2.2 million of his own money into his campaign to run ads. 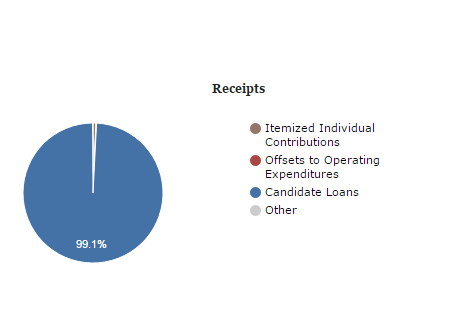 Upstate Jobs Party candidate Martin Babinec has invested $2.2 million of his own money into his campaign. CREDIT FEDERAL ELECTION COMMISSION

“Babinec has an advantage that most third party candidates don’t have, which is that he has a fair amount of money he’s willing to spend to get his name out there,” said Philip Klinkner, a Hamilton College government professor. “That’s a lot of money for anybody. In a lot of congressional races, that would be enough to win.”

It may not be enough in this race, though. The campaign is quickly becoming one of the most expensive in New York state. And Klinkner says it’s unlikely Babinec could pull out a victory unless there’s some major shakeup. Yet Babinec is unwavering, saying this election cycle presents a unique opportunity.

“Voters are so angry and frustrated by what’s happened in this particular election at the top of the ticket, it’s created a greater receptivity for an independent candidate than any of us have seen before,” Babinec said. “I made the choice to run as an independent, knowing that it would be difficult, but knowing this was the right time. If there was ever a time for an independent to be elected in this district,  with the candidates that I’m facing, this is the perfect opportunity.”

The self-titled jobs candidate is putting a lot of stock in his entrepreneurial background. It’s his signature campaign theme and what he believes will be key to winning the race.

“I’m an entrepreneur and have spent last 6 years volunteering to help people start companies and create more jobs upstate,” Babinec said. “While I have not sought public recognition for that, I certainly have made a lot of friends and continue to develop more people and bring them together. So heading into the election, I am absolutely able to leverage these relationships.”

That experience may be paying off. The U.S. Chamber of Commerce endorsed Babinec last week, the first time the business organization has backed an independent candidate in a congressional race.

The 22nd Congressional District includes all or part of eight counties stretching from the Mohawk Valley to the Southern Tier.