How will you bring jobs to the Mohawk Valley?

That is likely one of the biggest questions that the three people running for retiring U.S Rep. Richard Hanna’s congressional seat have been, or will be, asked as we get closer to November’s election.

What is your plan for bringing jobs to the district?

Tenney: In order to make New York competitive again and bring jobs and businesses back to our state, we must reduce crushing taxes and burdensome regulations. We need to empower small businesses, which create nearly 70 percent of all new jobs, and stop cronyism, which dumps taxpayer money into corporate welfare schemes that don’t create jobs. Congress also needs to re-examine and renegotiate bad trade deals that don’t put American workers first, including the Trans-Pacific Partnership.

Myers: I understand the challenges and opportunities to create jobs. My father took a small $300 investment to create Dick’s Sporting Goods. I also ran my own small business. We need to invest in infrastructure and entrepreneurs in our communities, fix bad trade deals, and make sure taxes and regulations aren’t drowning small businesses. The answer is not to give huge tax cuts to large corporations paid for by middle class taxpayers and small businesses.

Babinec: Upstate’s regulatory environment is not business friendly, but neither is Silicon Valley (where I formed my company TriNet) or New York City. Yet both are thriving with robust job growth powered by innovation companies in the newer industries. We have the talent base and assets to grow many such companies upstate — fueled by private investors, not taxpayers. To do that, we need to show leadership in Congress guiding a collaborative effort leveraging our resources and empowering entrepreneurs.

What challenges do you anticipate facing in implementing your plan and how will you address those challenges?

Tenney: The most difficult challenge that comes with implementing a plan to create jobs is getting Congress to act on rolling back taxes and regulations. Politicians are great at rewarding donors and special interests with tax loopholes and government handouts but awful at enacting policies that create an environment where businesses can grow and hire. We must bring both parties together to implement policies to discourage outsourcing to China, Mexico and other countries. I will provide an independent voice in Congress for New York’s manufacturers and family farms, and sponsor legislation to get government out of the way for honest, hardworking people.

Myers: Congress is in gridlock and the American people, like me, are fed up. Whether it was my service on my local school board or county legislature, I work across party lines so we can make real progress. It doesn’t matter if it’s a republican idea or a democrat idea. What this country needs is people in Congress who do the right thing, not necessarily the partisan thing, and that’s what I will do.

Babinec: Ever the challenge with job creation is that voters want results immediately and that means most politicians look to what they think is the easy fix, which is business attraction — throwing taxpayer dollars at companies. The truth is we too often look outside when the answers are right here in our communities, colleges and neighbor’s garage. As congressman, I’ll put the focus on our assets and a collaborative approach to get people working together. 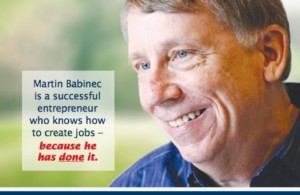 NEXT -> Let’s keep families together in Upstate New York. Learn more about the Babinec JOBS Effect Plan, which includes fostering an environment that leverages private sector investment and faster growth by creating new companies and jobs in innovation industries.