U.S. Rep. Richard Hanna currently holds the position, but he plans to retire at the end of the year.

A few hundred people packed the room, many eager to hear from all three candidates.

Each candidate dicussed the main message they hoped to deliver.

“There’s a lot of top issues but the number one would probably be jobs,” Myers said. “But then we have issues with opioid addiction, we have national security and my passion is actually education. So it would be great to tackle all of these things and quite frankly I think education boarders all of them and education is the key to everything.”

“I’m also the only candidate that’s started and grown a business in Silicon Valley and taken a lot of lessons learned from other areas,” Babinec said. “Not only Silicon Valley but other places where my company TriNet operates. So bringing that experience in to understand what it takes for companies, in these new industries, to get started what kind of help do they need, what kind of resources to they need, where are those resources located, that’s where I have an opportunity to influence creating jobs much better than anyone else in this race.”

“My campaign is really based on three things,” Tenney said. “It’s the economy and jobs, it’s about our security and safety as American citizens, and it’s about fighting corruption and those are the three main issues that I think are important. This is about jobs it’s about the economy it’s about security and securing our border making sure are American citizens are put first and again it’s about fighting corruption and ending cronyism and ending the pay-to-play culture that we have not only in Albany but apparently we have in {Washington} D.C. as well.”

Elaine Cobb, of Little Falls, said she wanted to hear about a few specific issues.

“Well as a retired teacher I most definitely was interested in their position about education and common core,” she said. “I’m also very interested in job creation because I do think that’s a very important thing in upstate New York, particularly we’re stressed when it comes to having jobs for everybody.”

The general election is Nov. 8. 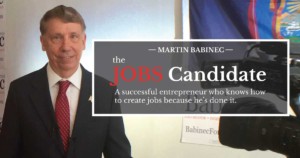 NEXT -> Each week leading up to the election Martin Babinec will release a new issue important to the voters of District 22. Learn more about his position on Public Education and Tax & Regulatory Reform.