By Syracuse Media Group Editorial Board

The 22nd Congressional District – sprawling across all of Madison, Oneida, Cortland and Chenango counties and part of Oswego, Broome, Herkimer, and Tioga counties — has a long history of electing political moderates to Congress. Republican Sherwood Boehlert held the seat for 24 years, followed by conservative “Blue Dog” Democrat Michael Arcuri for four and Republican Richard Hanna for six.

Of the three, the Syracuse Media Group editorial board chooses Babinec as the candidate who offers the best chance to represent the region in NY22’s tradition of pragmatic, independent thinkers.

Babinec is a former software entrepreneur who commuted from Little Falls to Silicon Valley for a decade while he and his wife raised a family here. After selling his company, Babinec started a nonprofit, Upstate Venture Connect, to link entrepreneurs to expertise and funding. He wants to create some of the same conditions in Upstate New York that make places like California, Boston and New York City hotbeds of innovation and job growth. Babinec notes that New York’s high taxes are often cited as a deterrent to business growth, but jobs are growing just fine in those other high-cost places.

Cutting taxes and regulations is important, he says, sounding like the Republicans with whom he would caucus in the House. But more important, Babinec says, is to nurture new, innovative businesses that have the potential to create thousands of good-paying jobs – and give young people a reason to stay after they graduate from Upstate colleges and universities. We have heard this before from candidates for public office, but rarely have we come across one who has done it.

Tenney, of New Hartford, works in her family publishing business and is a lawyer. She was elected to the New York state Assembly in 2010, where she has been a thorn in the side of the chamber’s scandal-plagued Democratic majority. Tenney is a strident critic of Gov. Andrew Cuomo’s economic development strategy, calling it “crony capitalism.” Her focus is on cutting government and taxes. She and Babinec agree that government handouts don’t create jobs.

Tenney drew an unfavorable portrait of Hanna, who beat her in a bitter 2014 primary and refuses to endorse her this time around. She criticized his support for Hillary Clinton and said that she, unlike him, would stand up for conservative Republican principles. We don’t doubt it – but we doubt she would emulate Hanna’s willingness to work with members of the opposing party. After years of dysfunction and this tumultuous campaign, the last thing Washington needs is another obstructionist lawmaker.

Myers, of Vestal, grew up in her family retail business, Dick’s Sporting Goods. She has been involved in politics at the grassroots, as a school board member for 18 years and as a Broome County legislator for two years. Her jobs agenda focuses on aligning education with the skills needed by employers, improving access to credit and supporting agricultural products such as hops and industrial hemp. Myers is soft-spoken but did not shrink from rebutting some harsh statements from Tenney during a meeting of the editorial board.

We would describe all three candidates as conservative, but by varying degrees. Myers is a Democrat who supports gun rights and Planned Parenthood. Babinec claims to be a centrist not beholden to either political party. Tenney is firmly on the GOP’s right and says she admires tea party principles, harking back to its “taxed enough already” roots.

Of the three, the independent Babinec has the best opportunity to pull the extremes in both parties closer to the center. Congress needs to get to work, and we’re counting on Babinec to help break gridlock.

Why we endorse candidates

The editorial board operates independently and separately from news coverage.

We believe voting is a privilege and an obligation of citizenship and urge you to exercise your right to vote. 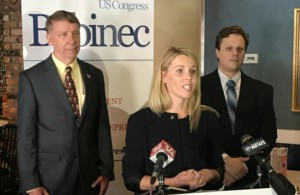 NEXT -> Martin Babinec believes this election is our chance to create the future we want. Here are the people and organizations supporting him as our next Congressman in District 22.