Little Falls, New York – In the face of a barrage of special interest fueled negative attacks from career politicians Claudia Tenney and Kim Myers, the Babinec campaign fired back, releasing a new ad, “Just Right.”  The ad highlights Babinec’s independence from the special interests, his commitment to running a positive campaign and the sheer ludicrousness of the cookie cutter partisan attacks.

“Claudia Tenney and Kim Myers should be ashamed, from obscene ballot access standards, to a partisan board of elections, to bogus attacks funded by special interests, they are part of a system that is rigged against newcomers,” said Babinec.
Babinec, the only competitive third party congressional candidate in America added, “the two party system is failing the American people, ignoring their pain and selling out to the highest bidder – we all deserve better.” 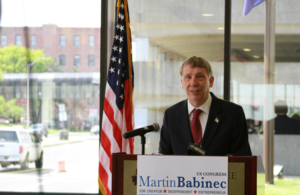 NEXT -> Get to know our independent Congressional candidate. Martin Babinec is a proven leader with over 20 years of experience creating jobs. Learn more about Martin’s pursuit of the American Dream and his commitment to helping others succeed.
By press|2016-10-26T15:23:18+00:00October 19th, 2016|Featured, Press Releases, Video|0 Comments