Babinec Shut Out of NRA Rating

2A Supporter Babinec, whose father was a Remington Shop Steward, shut out of NRA Rating

Little Falls, New York – Independent, Reform and Upstate Jobs Candidate Martin Babinec, a strong 2nd Amendment supporter, whose father worked in a Remington factory, was denied an NRA rating simply because he is a third party candidate.
Babinec, who was interviewed by the NRA and submitted a questionnaire at their request has been informed that, despite his strong support of the 2nd Amendment, no rating would be issued.

“It’s sad, my Dad was a shop steward in the Remington community, I have a deep connection to the plant and am rock solid supporter of the 2nd Amendment issue – yet the NRA thinks I’m not worthy of a rating.” 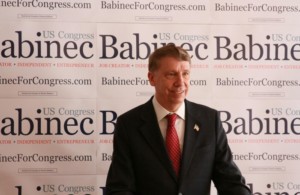 NEXT -> In addition to Martin Babinec’s strong commitment to job creation, each week he’ll release a new issue important to the voters of District 22, starting with where our Congressional candidate stands on Public Education, Tax & Regulatory Reform and the 2nd Amendment. View all issues.
By press|2016-10-11T21:04:47+00:00October 11th, 2016|Featured, Press Releases|1 Comment