LITTLE FALLS—– Almost one month and a total of 21 votes later, Martin Babinec was declared the winner of the Reform Party primary and is now guaranteed a ballot line in November.

“What Debbie Wasserman Schultz and the Democratic Party did to Bernie Sanders is simply a disgrace — but it’s just a symptom of a much larger problem that I and so many other citizen candidates face. Elections are dominated by insiders with an agenda,” the Little Falls resident said in a news release.

“Bernie and [Republican presidential nominee] Donald [Trump] are both right. The system is rigged against outsiders who want change and for career politicians who want to maintain the status quo. The status quo is broken,” he added.

In the primary for the 22nd Congressional District, Babinec launched a successful opportunity to ballot campaign on the Reform line, beating the endorsed candidate Claudia Tenney by 20-1.

It took almost a month for the election to be certified, according to the release.

“The system is set-up to discourage competition and the boards of election don’t have the resources or, in some cases, the professional management necessary to guarantee fair elections,” said Babinec. “The deck is stacked against a regular citizen, a working mother or father, a concerned citizen or a frustrated small business owner who wants to run for elected office.” 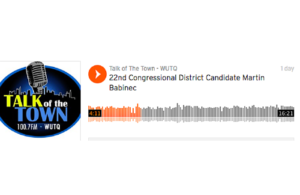 Next -> Martin Babinec interviews with WUTQ FM “Talk of the Town” about the creation of a new ballot line with a message that focuses on creating jobs.